Is there a genetic component to endometriosis? 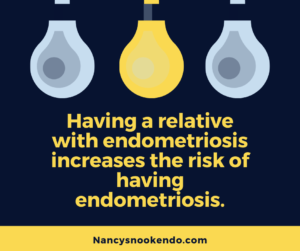 Is there a genetic component to endometriosis? According to various studies, there is. (You can find links to several of these studies, including the ones below, in Origin Theories of Endometriosis.) This past week someone asked if there is an increased risk if there is a family history on your father’s side. According to this study, there is a “definite kinship factor with maternal and paternal inheritance contributing”.

Another often asked question is how strong is the risk associated within families. According to one study, there is an estimated 5.2 increased risk between sisters and a 1.6 increased risk in cousins. The study also stated that among twins, there was a 51% increased risk. Another study indicated that there is a “sixfold increased risk for first-degree relatives of women with laparoscopically confirmed diagnosis of endometriosis”. Another study indicates a “first-degree relatives of affected women are 5 to 7 times more likely to have surgically confirmed disease”. Yet another study indicated that there is a stronger association with genetic risk for “severe” disease versus “minimal” or “moderate”. (Remember that disease severity in staging is based on the anatomy affected and fertility not necessarily the severity of symptoms- see more about that here.)

While this doesn’t mean a relative will definitely have endometriosis just because you do, it does indicate an increased risk, especially for first degree relatives. There are several genes noted to be involved in endometriosis and several mechanisms on how those genes are expressed in endometriosis. While these studies are paving the way to understanding endometriosis, there is still much to be learned.

Can endometriosis persist after hysterectomy/ovary removal/menopause?
Prev
Is there a link between heart disease and endometriosis?
Next