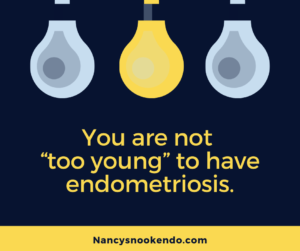 Endometriosis, even deep infiltrating endometriosis, can affect teenagers. Saridogan (2017) reports that endometriosis is a common in teens who have chronic pelvic pain, and that deep infiltrating and ovarian endometriosis are found in teens- not just “superficial” disease. Yeung, Gupta, and Gieg (2017) state that “surgical management (especially by an expert surgeon) has been shown to be beneficial in reducing pain, improving infertility, and preventing progression or recurrence of disease” in teenagers. Read more below:

“Endometriosis is a common finding in adolescents who have a history of chronic pelvic pain or dysmenorrhoea resistant to medical treatment, however the exact prevalence is unknown. Both early/superficial and advanced forms of endometriosis are found in adolescents, including ovarian endometriomas and deep endometriotic lesions. Whilst spontaneous resolution is possible, recent reports suggest that adolescent endometriosis can be a progressive condition, at least in a significant proportion of cases. It is also claimed that deep endometriosis has its roots in adolescence. Optimum treatment is far from clear and long term recurrence is still a significant problem. The most frequently reported treatment approach in the published literature is a combination of surgery and postoperative hormonal treatment with the combined oral contraceptives, progestins, levonorgestrel intrauterine system or gonadotrophin releasing hormone analogues. Use of gonadotrophin releasing hormone analogues and long term progestins should be carefully considered due to concerns over continuing bone formation in this age group. There is currently no consensus as to whether surgery should be avoided as much as possible to prevent multiple operations in the long term, or surgical treatment should be considered at an early stage before more severe lesions develop. Further research is required to determine which approach would offer a better long term outcome.”

“The recognition and management of endometriosis in the adolescent patient is challenging. A strong clinical suspicion for endometriosis should be maintained in the adolescent who suffers from acyclic pelvic pain as well as absenteeism from school and lack of participation in daily activities. Risk factors include the presence of an obstructive Mullerian anomaly, a family history of endometriosis, and conditions that prolong exposure to endogenous and exogenous estrogens. Empiric medical therapy with nonsteroidal anti-inflammatory drugs and combined oral contraceptive pills may be considered in most adolescents with endometriosis. Failure of empiric therapy may warrant diagnostic laparoscopy, which affords a concomitant opportunity for treatment via excision of endometriosis. Endometriotic implants in the adolescent tend to be more atypical, appearing red/flame-like, clear/polypoid, or vesicular. Endometriosis tends to recur more often in adolescents when compared with adults, and the role of postoperative medical therapy for the suppression of disease progression is not entirely clear. Current knowledge on the impact of adolescent endometriosis on future fertility is limited but overall reassuring.”

“Complete laparoscopic excision of endometriosis in teenagers–including areas of typical and atypical endometriosis–has the potential to eradicate disease. These results do not depend on postoperative hormonal suppression. These data have important implications in the overall care of teenagers, regarding pain management, but also potentially for fertility. Further large comparative trials are needed to verify these results.”

“The majority of adolescent girls with chronic pelvic pain not responding to conventional medical therapy have endometriosis (up to 80%). Laparoscopy with biopsy is the only way to diagnose endometriosis in the adolescent population, and depends on recognition of atypical manifestations of the disease. Surgical management (especially by an expert surgeon) has been shown to be beneficial in reducing pain, improving infertility, and preventing progression or recurrence of disease. Postoperative hormonal suppression helps reduce pain symptoms and recurrence of endometriomas, but it does not seem to prevent disease recurrence or progression of peritoneal endometriosis, and has not been shown to improve future fertility. Postoperative suppression until pregnancy is based on expert opinion only. There is a need for good quality properly randomized trials.”

“Multiple studies have determined that endometriosis within the adolescent population requires different considerations for treatment as it present differently. Studies on the effects of surgical treatment for adolescents are insufficient, though the treatment may effective for pain reduction. There are few studies that emphasize that complete laparoscopic excision can significantly reduce the recurrence rates of endometriosis in adolescents (Yeung et al., 2017). The largest prospective study of adolescents with endometriosis did not find disease reoccurrence (diagnosed visually or histologically) after complete laparoscopic excision of the disease in teenagers at a repeat laparoscopy for pain (Tandoi et al., 2011). There is no consensus within the field that adjuvant medical treatments are necessary for all adolescent patients nor that long-term problems such as disease recurrence, infertility, or chronic pain may be prevented (Tandoi et al., 2011). The European Society for Human Reproduction and Embryology (ESHRE) has provided guidelines on treatment for clinicians, which include counseling women presenting with endometriosis associated symptoms (e.g. dyspareunia, infertility, CPP), as well as providing known successful treatments of these symptoms, such as hormonal contraceptives, even if the cause is unknown (Dunselman et al., 2014). This is partially due to the invasiveness of laparoscopic surgery, as well as the ease of prescribing hormonal contraceptives, and its dual purpose of preventing pregnancy. This empirical treatment is especially common in adolescents with pelvic pain and dysmenorrhea (Yeung et al., 2017). However, the ESHERA has noted that recommending treatment of the symptoms instead of surgery for young women presenting with endometriosis symptoms may cause longer delays in diagnosis (Dunselman et al., 2014). Approximately 80 % of adolescent girls with CPP not responding to conventional medical therapy have endometriosis (Yeung et al., 2017). As surgery is currently the main procedure for diagnosing, this may result in young women carrying the painful condition into adulthood. Additionally, it has been shown that using hormonal contraceptives in adolescents to treat of primary dysmenorrhea could be indicative of the diagnosis of deep endometriosis in later life (Chapron et al., 2011). The paradox of recommending empirical treatment to symptomatic adolescents might be perpetuating the significant delay in diagnosing endometriosis.”

“Adolescent endometriosis is not a rare condition. In our study a familial history was reported in more than one-third of patients. Among those patients treated for DIE, there was a trend for higher rates of recurrences (symptoms or lesions) that required repeat laparoscopy. However, the impact on subsequent fertility appeared to have been limited.”