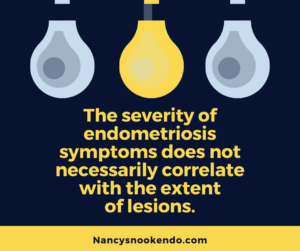 Some women might experience minimal pain with endometriosis, while many experience may experience severe pain. Bloski and Pierson (2008) state that “women with minimal or mild endometriosis have been found to have high degrees of pain and infertility, while asymptomatic women have been diagnosed with Stage IV on laparoscopy for tubal ligation. The variability in clinical presentation and stage of disease likely reflects of our lack of understanding of the pathophysiology of endometriosis.” Pain is influenced by several factors- the location of the endometriosis, the “type” or “stage” (clear, black, red, etc) of lesions, how much innervation is there, how much inflammatory chemicals are being released, if adhesions are pulling on anatomy, if other conditions such as pelvic floor dysfunction, interstitial cystitis, or adenomyosis is present. Pain with endometriosis is multifactorial, including irritation of nerves in the pelvis, new nerve growth, heightened sensitivity to pain, inflammation in the pelvis, and pain producing agents in the pelvic fluid (Ferrero, Vellone, & Barra, 2019). Interesting is that one study, from 1986, demonstrates evidence from many years ago, yet misinformation and misconceptions still exist! Differences that could influence pain levels:

“The three most commonly suggested mechanisms for pain production in endometriosis are [1] production of substances such as growth factors and cytokines by activated macrophages and other cells associated with functioning endometriotic implants (7, 8); [2] the direct and indirect effects of active bleeding from endometriotic implants; and [3] irritation of pelvic floor nerves or direct invasion of those nerves by infiltrating endometriotic implants, especially in the cul-de-sac (8, 9). It remains plausible that in any individual more than one or all of these mechanisms may be in operation. The neural irritation or invasion hypothesis has gathered much support in the past decade. Tender nodularity in the region of the cul-de-sac and the areas of the uterosacral ligaments has approximately 85% sensitivity and 50% specificity for the diagnosis of infiltrative endometriosis (10). Women with such findings on pelvic examination may have deep dyspareunia and more severe dysmenorrhea. Those with infiltration of the uterosacral ligaments and/or diseases directly adjacent to or invading the rectal wall may have dyschezia (9). The intensity of pain associated with infiltrative disease has been correlated with the depth of penetration of the lesion. The most severe pain is seen when the disease extends ≥6 mm below the peritoneal surface (10). Both perineural inflammation and direct infiltration of nerves by endometriosis have been observed (11). However, these kinds of perineural changes have been observed most commonly in women with central pelvic disease (i.e., around the uterosacral ligaments and in the cul-de-sac and not in those with lateral peritoneal or ovarian endometriosis).”

“The severity of the symptoms of endometriosis has not always correlated well with the anatomic severity of the disease. This lack of correlation may be due to variations in the metabolic activity of the endometriotic implants present at different stages of the disease. Because prostaglandin F (PGF) has been implicated as a hormonal mediator of the clinical symptoms of endometriosis, PGF synthesis and content was measured in implants from 14 patients with mild, moderate, severe, or extensive disease. To assess whether PGF production was related to the status of implants, the authors classified implants, based on gross and histologic criteria, as (1) petechial or reddish; (2) intermediate or brown; or (3) powder-burn or black. PGF production of implants from patients with mild or moderate disease was greater than that of implants from patients with severe or extensive disease (P < 0.05), and PGF content was similar for all stages of endometriosis. Petechial implants produced twice the amount of PGF than intermediate implants (P < 0.05), which in turn produced more PGF than powder-burn implants (P < 0.05). Powder-burn implants did not have the in vitro capacity to produce PGF, and the amount of PGF contained in implants of all classes was similar. Therefore, endometriotic implant PGF production and possibly other biochemical activities are dependent on the physical status of the implant. The classification of implants by morphologic appearance may afford additional assistance in determining the prognosis of the disease and in the examination of the subtle effects of the disease on symptoms.”

“There was significantly different distribution of nerve fibers in multiple endometriosis lesions, which was correlated with dysmenorrhea, anus pain, dyspareunia and chronic pelvic pain, not with clinical staging.”

“The presence of endometriosis-associated nerve fibers appear to be related to both the pain experienced by women with endometriosis and the concentration of PF cytokines; however, this association varies with the lesion location.”

“Position and depth of invasion of endometriotic implants greatly impacts the procedure performed. Deeply infiltrating endometriosis (DIE) consists of endometriotic nodules that invade greater than 5mm into the peritoneal or organ surface. The type of pelvic pain is correlated to the location of the DIE implants and can aid in pre-operative assessment of each patients individualized symptoms (1). Patients with DIE are more likely to have noncyclic CPP, most likely related to the infiltration of subperitoneal or visceral nerves by the implant. This is facilitated by activation of prostaglandins and chemokines associated with local angiogenic and neurogenic environments. This is thought to increase C-type nerve fibers and increase sensation of CPP due to the constant inflammatory state that endometriosis creates (15). The stroma of these lesions expresses receptors for nerve growth factor (NGF), which aids in recruitment of sensory nerve fibers (16). This increase in innervations allows for further pain perception in affected individuals. The increase in these nociceptors is further enhanced by sensitization with estrogen, which is found in abundance due to local implant estradiol (E2) production.”

“The pelvis is highly vascularized and enervated, which is why pain impulses from this region are processed and sent to the brain (Fig. 1).4–6 This, along with multiple other factors, contributes to the pain syndrome that is associated with endometriosis. Peritoneal fluid in women with endometriosis contains high levels of nerve growth factors that promote neurogenesis, the ratio of sympathetic and sensory nerve fibers is significantly altered within endometriotic tissue, and the nerve density within endometriotic nodules is increased.7,8 Also, the cytokines and prostaglandins produced by mast cells and other inflammatory cells attracted to ectopic endometrial-like tissue can activate nerve fibers and can trigger nearby cells to release inflammatory molecules.5,6,8,9

“Another source of pain is nerve fiber entrapment within endometriotic implants.4 The cyclical sciatic pain, weakness, and sensory loss can all stem from endometriotic entrapment of the sciatic, femoral, or lumbosacral nerve roots.9 There are numerous descriptions of sacral radiculopathy occurring in patients with endometriosis, and there are even descriptions of wheelchair-bound patients becoming fully ambulatory after treatment of infiltrative endometriosis.9

“Central sensitization is another mechanism that promotes endometriosis-associated pain. Patients become highly sensitive to subsequent painful stimuli because of endometriosis-induced neuroplastic changes in descending pathways that modulate pain perception.10 In response to a subsequent insult (ie, nephrolithiasis or peritoneal organ injury), women can experience pain from endometriosis as a result of inability to engage descending inhibition pathways.”

“Initial work on mapping of pain associated with the endometriosis lesions resulted in some thought-provoking findings. The classic black lesions were found to be painful in only 11% of patients when the lesion was touched. Similarly, white lesions were painful in 20% of patients with red lesions at 37%, and clear lesions at 32% were the most painful (Table 1). These results added further reason as to why initial therapy had such poor results. Surgeons would only “see” the black lesions and removed them, but these were the least painful lesions. The most painful clear lesions were not “seen” at laparotomy and therefore remained, as did the pain. What became apparent next, while mapping the patient, was the fact that the pain extended 28 mm beyond the visible border of the lesion onto what looked like “normal” peritoneum ((Figure 1). Therefore, if the surgeon only removed the lesion at its border, the microscopic disease in the previously identified normal looking peritoneum was left, and persistence or recurrence of the symptoms was encountered.”

“Several lines of recent evidence suggest that pelvic innervation is altered in endometriosis-affected women, and there is a strong presumption that nerve fibers demonstrated in eutopic endometrium (of women with endometriosis) and in endometriotic lesions play roles in the generation of chronic pelvic pain. The recent observation of sensory C, sensory A-delta, sympathetic and parasympathetic nerve fibers in the functional layer of endometrium of most women affected by endometriosis, but not demonstrated in most women who do not have endometriosis, was a surprise. Nerve fiber densities were also greatly increased in myometrium of women with endometriosis and in endometriotic lesions compared with normal peritoneum. Chronic pelvic pain is complex, and endometriosis is only one condition which contributes to this pain. The relationship between the presence of certain nerve fibers and the potential for local pain generation requires much future research.”

“Our group discovered that ectopic growths harvested from ENDO rats and women with established endometriosis develop their own C-fiber (sensory afferent) and sympathetic (autonomic efferent) nerve supply. The supply is derived from nerve fibers innervating nearby territories that sprout branches into the growths [10], [11]. This discovery suggests that, rather than the growths alone, it is the ectopic growth’s own innervation that is a major contributor to the maintenance and modulation of pain in established endometriosis.”

“The presence of increased activated and degranulating mast cells in deeply infiltrating endometriosis, which are the most painful lesions, and the close histological relationship between mast cells and nerves strongly suggest that mast cells could contribute to the development of pain and hyperalgesia in endometriosis, possibly by a direct effect on nerve structures.”

“The objective of this study was to evaluate the significance of severe preoperative pain for patients presenting with ovarian endometrioma (OMA)…. After multiple logistic regression analysis, uterosacral ligaments involvement was related with a high severity of chronic pelvic pain [odds ratios (OR) = 2.1; 95% confidence interval (CI): 1.1–4.3] and deep dyspareunia (OR = 2.0; 95% CI: 1.1–3.5); vaginal involvement was related with a higher intensity of lower urinary symptoms (OR = 13.4; 95% CI: 3.2–55.8); intestinal involvement was related with an increased severity of dysmenorrhoea (OR = 5.2; 95% CI: 2.7–10.3) and gastro-intestinal symptoms (OR = 7.1; 95% CI: 3.3–15.3). CONCLUSIONS: In case of OMA, severe pelvic pain is significantly associated with deeply infiltrating lesions. In this situation, the practitioner should perform an appropriate preoperative imaging work-up in order to evaluate the existence of associated deep nodules and inform the patient in order to plan the surgical intervention strategy.”

“In the brain stem, the neurotransmitters serotonin and norepinephrine modulate pain transmission through ascending and descending neural pathways. Both serotonin and norepinephrine are also key neurotransmitters involved with the pathophysiology of depression. Tricyclic antidepressants are effective treatments for pain and depression; selective serotonin reuptake inhibitors provide less benefit. Duloxetine and venlafaxine, which are serotonin and norepinephrine reuptake inhibitors, were shown in clinical trials to alleviate pain and depressive symptoms. Diabetic neuropathy and other chronic pain syndromes were also shown to benefit from duloxetine and venlafaxine. Antidepressants remain fundamental therapeutic agents for depression and anxiety disorders. Their extended use into chronic pain, depression with physical pain, physical pain with or without depression, and other potential medical conditions should be recognized.”

“Women with pelvic pain and suspicion of endometriosis should probably be treated more thoroughly to prevent or at least minimize the concomitant development of central sensitization.”