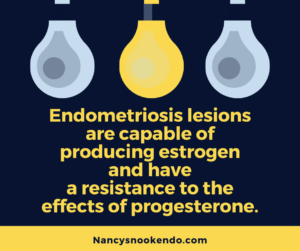 “CONCLUSION: A stromal cell defect in endometriosis blocks formation of progesterone-dependent production of factors leading to 17beta-hydroxysteroid dehydrogenase type 2 deficiency and defective conversion of estradiol to estrone in epithelium.”

“Throughout the reproductive years, the rise and fall in ovarian hormones elicit in the endometrium waves of cell proliferation, differentiation, recruitment of inflammatory cells, apoptosis, tissue breakdown and regeneration. The activated progesterone receptor, a member of the superfamily of ligand-dependent transcription factors, is the master regulator of this intense tissue remodelling process in the uterus. Its activity is tightly regulated by interaction with cell-specific transcription factors and coregulators as well as by specific posttranslational modifications that respond dynamically to a variety of environmental and inflammatory signals. Endometriosis, a chronic inflammatory disorder, disrupts coordinated progesterone responses throughout the reproductive tract, including in the endometrium. This phenomenon is increasingly referred to as ‘progesterone resistance’. Emerging evidence suggests that progesterone resistance in endometriosis is not just a consequence of perturbed progesterone signal transduction caused by chronic inflammation but associated with epigenetic chromatin changes that determine the intrinsic responsiveness of endometrial cells to differentiation cues.”

Why is this progesterone resistance in endometriosis lesions important? Because progesterone helps in the process of metabolizing estrogen:

“In conclusion, inactivation of 17beta-estradiol is impaired in endometriotic tissues due to deficient expression of 17betaHSD-2, which is normally expressed in eutopic endometrium in response to progesterone. The lack of 17betaHSD-2 expression in endometriosis is not due to alterations in the levels of immunoreactive progesterone or estrogen receptors in this tissue and may be related to an inhibitory aberration in the signaling pathway that regulates 17betaHSD-2 expression.”

“CONCLUSION(S): Local estrogen concentration may be much higher in epithelial cells than in stromal cells in deep endometriotic tissue.”

Furthermore (part of this is particular for those with infertility):

“On the basis of the role of inflammation in the induction of a progesterone-resistant endometrium, we hypothesize that failure of implantation might be explained, perhaps in part, by alteration in the uterine microbiome in response to inflammation…This hypothesis finds support in the ability of environmental factors to alter progesterone sensitivity…A very important finding derived from this study demonstrated that TCDD-mediated P4 resistance might increase sensitivity to inflammation, even in subsequent generations not exposed to the toxicants, resulting in PTB.[98] By means of extrapolation, these data support the hypothesis that a combination of environmental factors, taken together, are a risk for recurrent pregnancy loss and PTB in humans; the mechanism being creation of a P4-resistant endometrium and the presence of inflammation. Therefore, we conclude that the association between the microbiome of the reproductive tract and circulating serum E2 concentrations may reflect the environment and availability of glycogen. However, progesterone resistance, albeit an unproven relationship to the microbiome, might contribute to implantation failure and infertility. This putative role of undetected endometrial colonization and progesterone resistance requires further investigation.”

“The cells were derived from normal woman and those with endometriosis, an E2-responsive, P4-resistant, inflammatory disorder with implantation-based infertility and poor pregnancy outcomes.”