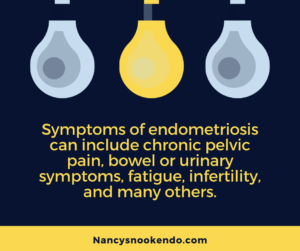 Endometriosis symptoms can vary widely in both presentation and severity. While endometriosis can present with “typical” symptoms such as chronic pelvic pain during menstruation, it can also present with symptoms not readily attributed to endometriosis. One example is sciatica type symptoms- pain running along the lines of the sciatic nerve (from the low back down the back of the leg). For some, infertility rather than pain is the first sign that they note.

The following study performed a literature review on pelvic endometriosis in order to identify signs and symptoms (hoping to lead to more timely investigation into the possibility of endometriosis).

Some signs of endometriosis in other places/specific places might include:

This qualitative study describes symptoms as experienced by individuals with endometriosis:

“All women had suffered severe and progressive pain during menstrual and non-menstrual phases in different areas such as the lower abdomen, bowel, bladder, lower back and legs that significantly affected their lives. Other symptoms were fatigue, tiredness, bloating, bladder urgency, bowel symptoms (diarrhoea), bladder symptoms and sleep disturbances due to pain….

“The women described the pain as ‘sharp’, ‘stabbing’, ‘horrendous’, ‘tearing’, ‘debilitating’ and ‘breath-catching’. Severe pain was accompanied by vomiting and nausea and was made worse by moving or going to the toilet. The frequency of pain differed between the women with some reporting pain every day, some lasting for three weeks out of each menstrual cycle, and another for one year…

“Most of the women complained of dyspareunia during and/or after sex….

“Heavy and/or irregular bleeding was another symptom experienced but in some women, it was a side effect of endometriosis treatment. Bleeding when exercising and after sex were experienced by only a few women. Women and their partners were particularly worried when bleeding occurred after sex….

“Most women reported that endometriosis had significant impacts as they lived through it every day of their lives…. The physical impact was associated with symptoms, treatment side-effects and changes in physical appearance. Pain in particular was reported to limit their normal daily physical activity like, walking and exercise. Women who had small children mentioned that they were not able to care for them as they would like…Fatigue and limited energy were also among reported physical impacts of endometriosis. Although infertility was primarily a physical impact of endometriosis, it had a negative impact on the psychological health, relationship, and financial status of the women….

“Most women reported a reduction in social activity, and opted to stay home, and missed events because of severe symptoms especially pain, bleeding and fatigue. They resorted to using up their annual leave after exhausting their sick leave because of their disease. Some women also decreased their sport or leisure activities and some gave up their routine sport including water ski, horse-riding, swimming and snow skiing….”

PrevPreviousWait a minute- is that true?
NextEndometriosis OverviewNext
We use cookies to ensure that we give you the best experience on our website. If you continue to use this site we will assume that you are happy with it.OkPrivacy policy