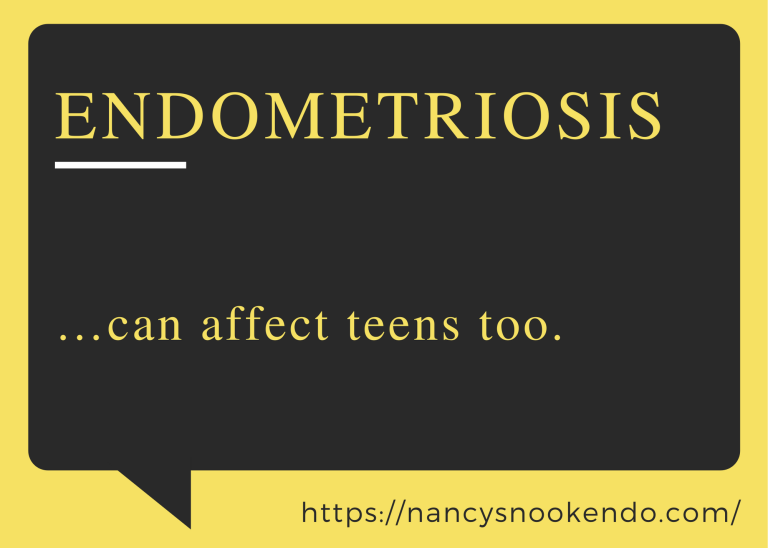 Endometriosis in adolescents was recently reviewed by Liakopoulou et al. (2022), and they report that “adolescent endometriosis is a challenging diagnosis” and that “the disease can be easily overlooked”- thus the true incidence of endometriosis in teens is not really known. The diagnosis in teens is often delayed which “can lead to suffering for several years.” The authors state that “consequently, early diagnosis appears to be of upmost importance, especially as far as adolescents and young patients are concerned, as it can optimize life quality, relief symptomatology, and decrease the negative impact of the disease on future fertility.”

To achieve earlier diagnosis, the authors suggest that “further evaluation should be considered when prolonged use of nonsteroidal anti-inflammatory drugs (NSAIDs) is reported by the patient, there are relatives diagnosed with endometriosis (in cases of frequent absenteeism from everyday activities during menstruation), and estroprogestin contraceptives have been prescribed before the age of 18 years for primary dysmenorrhea treatment.” They report that “ACOG recommends laparoscopy for diagnosing endometriosis in adolescents” and that “diagnostic laparoscopy is indicated if there is no relief after 3–6 months of medical management.” The authors do report that ultrasounds and MRI’s may be utilized, but that normal imaging doesn’t rule out endometriosis. The authors state that “the benefits of laparoscopy do not only include the confirmation of diagnosis, but also the opportunity of intraoperative treatment.” But the ability to identify endometriosis is important as “during laparoscopy, endometriosis may have a variable appearance.” In adolescents, they report that “white, yellow-brown, red-pink lesions, as well as clear shiny vesicular lesions, are more frequent” and are “associated with greater levels of pain.” The authors also advise that “if suspicious lesions are not identified during laparoscopy, random biopsies of the cul-de-sac should be obtained.” The authors also remind us that “most adolescents present with stage I–II disease; however, advanced stage III–IV disease, including ovarian endometriomas, is increasingly diagnosed in adolescents” and that “the stage and location of the lesions do not directly corelate with the severity or frequency of symptoms.”

The authors note that to help with symptom relief “continuous hormonal therapy can be used to suppress menstruation and is considered safe.” But they report that the use of “gonadotropin releasing hormone (GnRH) agonist or antagonist is not recommended in adolescents with chronic pelvic pain and suspected endometriosis, due to potential impact on bone density.” If GnRH agonists are used, they state that the use “cannot exceed short periods of time, as long-term use may lead to bone density loss and potentially affect negatively cardiovascular risk.” They also caution that “GnRH agonists, when administered before surgery, change the macroscopic image of endometriotic lesions, make their visualization harder, and, thus, preclude effective surgical treatment.” They also state that “depot medroxyprogesterone acetate (DMPA) use is limited, due its association with lower bone mineral density” as well.