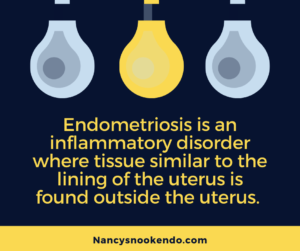 “Endometriotic lesion removal significantly alters the inflammatory profile both locally and systemically in women with endometriosis. Our findings indicate that ectopic lesions are the major drivers of systemic inflammation in endometriosis.”

Mast cells are immune system cells that can stimulate inflammation (Graziottin, Skaper, & Fusco, 2014). Endometriosis is an inflammatory disease, and degranulating mast cells have been found in higher quantities in endometriosis lesions versus normal tissue (Hart, 2015; Indraccolo & Barbieri, 2010). Estrogen seems to stimulate mast cells to support the inflammatory process (Zhu et al., 2018). In fact, one study reported estrogen receptors are expressed on mast cells (although the action of estrogen on the mast cell is not described) (Hart, 2015). While many therapies for endometriosis involve lowering estrogen production by the feedback loop between the brain and the ovaries, it should be remembered that endometriosis lesions demonstrate production of estrogen themselves (and also show resistance to progesterone) (Delvoux et al., 2009). The inflammation created can lead to pain (Indraccolo & Barbieri, 2010).

*When looking at studies, it is important to keep in mind the aim of the study. Many are looking for novel drug development or therapies. However, they can still shed light on how endometriosis behaves and why it produces the symptoms and effects it does.

“A second disease/condition that also appears to involve neuroinflammation with mast cell involvement is endometriosis (EMS). EMS is clearly an estrogen-dependent chronic inflammatory disorder….Interestingly, peritoneal fluid from patients with EMS contains higher levels of some cytokines than those without this condition (e.g., MCP-1 and IL-8 [96])…. Mast cells are prominent in EMS tissue but whether their role(s) in EMS development and progression are central to the disease or peripheral with mast cells being drawn to the site of lesions is still being debated (discussed in [109])….Degranulated mast cells have been detected in EMS lesions [111] and activated mast cells implicated in the associated fibrosis [112]. Furthermore, mast cells have been reported to express estrogen receptors and thus should be responsive to the sex hormones [113]. In fact, estrogen has been reported to result in mast cell activation with release of mediators, in part due to interactions with ER-alpha [113]. Furthermore, mast cells in EMS lesions are commonly found in close approximation to neural elements in such lesions (discussed in [109, 114]). Such close approximation of these two elements in lesions is somewhat supportive of the concept of active neuroinflammation and pain in EMS [115] and is analogous to what we have observed in abnormal skin wound healing and joint contraction models previously that were responsive to mast cell stabilizer interventions [13, 16, 17].”

“Mast cells are immune cells now viewed as cellular sensors in inflammation and immunity. When stimulated, mast cells release an array of mediators to orchestrate an inflammatory response. These mediators can directly initiate tissue responses on resident cells, and may also regulate the activity of other immune cells, including central microglia. New evidence supports the involvement of peripheral and central mast cells in the development of pain processes as well as in the transition from acute, to chronic and neuropathic pain. That behavioral and endocrine states can increase the number and activation of peripheral and brain mast cells suggests that mast cells represent the immune cells that peripherally and centrally coordinate inflammatory processes in neuropsychiatric diseases such as depression and anxiety which are associated with chronic pelvic pain. Given that increasing evidence supports the activated mast cell as a director of common inflammatory pathways/mechanisms contributing to chronic and neuropathic pelvic pain and comorbid neuropsychiatric diseases, mast cells may be considered a viable target for the multifactorial management of both pain and depression.”

“Complex interactions exist between cytokines, inflammation and the adaptive responses in maintaining homeostasis , health, and well-being. Like the stress response, the inflammatory reaction is crucial for survival and is meant to be tailored to the stimulus and time. A full-fledged systemic inflammatory reaction results in stimulation of four major programs: the acute phase reaction, the sickness syndrome, the pain program, and the stress response, mediated by the hypothalamic-pituitary-adrenal axis and the sympathetic nervous system. Common human diseases such as atopy/allergy, autoimmunity, chronic infections and sepsis are characterized by a dysregulation of the pro- versus anti-inflammatory and T helper (Th)1versus Th2 cytokine balance. Recent evidence also indicates the involvement of pro-inflammatory cytokines in the pathogenesis of atherosclerosis and major depression, and conditions such as visceral-type obesity, metabolic syndrome and sleep disturbances. During inflammation, the activation of the stress system, through induction of a Th2 shift, protects the organism from systemic ‘overshooting’ with Th1/pro-inflammatory cytokines. Under certain conditions, however, stress hormones may actually facilitate inflammation through induction of interleukin (IL)-1, IL-6, IL-8, IL-18, tumor necrosis factor- and C-reactive protein production and through activation of the corticotropin releasing hormone/substance P-histamine axis. Thus, a dysfunctional neuroendocrine-immune interface associate with abnormalities of the systemic anti-inflammatory feedback’ and/or ‘hyperactivity’ of the local pro-inflammatory factors may play a role in the pathogenesis of atopic/allergic and autoimmune diseases, obesity, depression, and atherosclerosis. These abnormalities and the failure of the adaptive systems to resolve inflammation affect the well-being of the individual, including behavioral parameters, quality of life and sleep, as well as indices of metabolic and cardiovascular health. These hypotheses require further investigation, but the answers should provide critical insights into mechanisms underlying a variety of common human immune-related diseases.”

“Anyone who has experienced a viral or bacterial infection knows what it means to feel sick. The behaviour of sick people changes dramatically; they often feel feverish and nauseated, ignore food and beverages, and lose interest in their physical and social environments. They tire easily and their sleep is often fragmented. In addition, they feel depressed and irritable, and can experience mild cognitive disorders ranging from impaired attention to difficulties in remembering recent events. Despite their negative impact on well-being, these symptoms of sickness are usually ignored. They are viewed as uncomfortable but banal components of infections1. Sickness is a normal response to infection, just as fear is normal in the face of a predator. It is characterized by endocrine, autonomic and behavioural changes and is triggered by soluble mediators that are produced at the site of infection by activated accessory immune cells. These mediators are known as pro-inflammatory cytokines, and include interleukin-1α and β (IL-1α and IL-1β), tumour necrosis factor-α (TNF-α) and interleukin-6 (IL-6). They coordinate the local and systemic inflammatory response to microbial pathogens. However, these peripherally produced cytokines also act on the brain to cause the aforementioned behavioural symptoms of sickness. Recently, it has been suggested that ‘sickness behaviour’2,3, a term used to describe the drastic changes in subjective experience and behaviour that occur in physically ill patients and animals, is an expression of a previously unrecognized motivational state. It is responsible for re-organizing perceptions and actions to enable ill individuals to cope better with an infection4. During the last five years, it has been established that pro-inflammatory cytokines induce not only symptoms of sickness, but also true major depressive disorders in physically ill patients with no previous history of mental disorders. Some of the mechanisms that might be responsible for inflammation-mediated sickness and depression have now been elucidated. These findings suggest that the brain–cytokine system, which is in essence a diffuse system, is the unsuspected conductor of the ensemble of neuronal circuits and neurotransmitters that organize physiological and pathological behavior….”

Hart, D. A. (2015). Curbing inflammation in multiple sclerosis and endometriosis: should mast cells be targeted?. International journal of inflammation, 2015. Retrieved from https://www.hindawi.com/journals/iji/2015/452095/

Main Content
We use cookies to ensure that we give you the best experience on our website. If you continue to use this site we will assume that you are happy with it.OkPrivacy policy